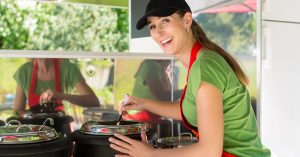 Food lovers can find just about any type of dish at take-out joints all around the world, but in many cases, the restaurant itself is a “take-out.”

That’s because entrepreneurs in the food industry have figured out creative ways to please hungry customers, even if they have limited space. They’ve repurposed mobile storage containers into eateries. The Tampa Bay Times called the idea  “The coolest trend in restaurants.” The idea has created hundreds of businesses from small mom and pop food counters to famous chains and multinational corporations. A.B. Richards is a storage container rental company, so we can’t let you turn one of ours into the neighborhood’s honest new bistro, but we wanted to let you know about this trend, to give you a sense of just how useful storage containers are.

One of the largest companies in the world, Starbucks, has bought into the idea. Restaurant designers from the Seattle-based company noticed the number of shipping containers in the Puget Sound and were inspired to create a drive-thru Starbucks franchise in Tukwila, WA that was repurposed from a storage unit. The chain quickly announced plans to build hundreds more of these stores.

Another food franchising behemoth repurposed storage containers to solve a unique problem. In 2010, Subway wanted to bring their famous sandwiches to workers in Manhattan building the Freedom Tower at Ground Zero. As the tower rose higher into the sky it was more difficult for the construction crew to break for lunch. Subway converted nine storage containers into a three-story restaurant that was mounted on a crane and powered by hydraulic legs, according to The New York Times. As the building went up, Subway went with it.

Large corporations aren’t the only ones repurposing mobile storage units into eateries. Plenty of other restaurateurs has come up with creative designs that make the most out of limited space.  Mobile storage units have been used to construct bars, shopping center kiosks, and counter service eateries. They can be burger joints, cafes with open air patios or the units can be stacked together to create unusual architecture. You find them in small towns or in some of the most cosmopolitan cities in the world such as New York, London, and Paris.

Portable storage container restaurants don’t even have to be built because of a need to conserve space. In 2015, the nation’s largest storage container restaurant was built in Asheville, North Carolina. The Smoky Mountain Supper Club is made up of 19 storage units, according to the blog inhabitant.com. The restaurant includes a wraparound deck and is nestled on a river bank near a boat house on a 1.8-acre plot of land.

The Benefits of Using Storage Units for The Restaurant Business

There are several benefits to repurposing a portable storage container as a restaurant. If you’re looking for a low-cost design, you can avoid heavy construction costs. Construction may be completed quickly. The Smoky Mountain Supper Club was erected in only three days. If space is at a premium, storage containers can give your restaurant a unique look without while remaining functional in tight quarters. You might even want to move the business around. Because these containers are portable, they can give you mobility.

A.B. Richards Can Help Restaurants and Other Businesses

If you’re in the restaurant business A.B. Richards can help you even if you can’t use our portable storage containers to build your eatery. You can use them to store extra tables, chairs, cooking supplies and seasonal items like outdoor seating. We have a trained sales staff who will assist you with any questions you might have and we will deliver the container right to you. We’ll also pick it up for no extra charge. Contact A.B. Richards today for more information.

Previous Post: « Get Organized in 2017 with Portable Storage Containers
Next Post: Tips on Packing for Office Relocation »