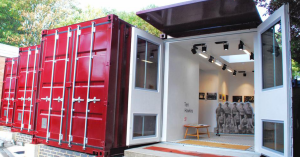 The Louvre, The Metropolitan Museum of Art, MOMA, and portable storage containers–believe it or not, they all have something in common. You may not think of the portable storage units that we rent at A.B. Richards to be the perfect venue for an art gallery, but more and more that’s becoming the case.

A.B. Richards Will Help You Master the Art of Storage

While A.B. Richards is a rental company and we can’t let you serve wine and cheese at a gallery opening in one of our units, we certainly love the fact that portable storage containers are being used to show off artists’ work. So we want to tell you a little bit about this phenomenon while reminding you that A.B. Richards will help make you a master of the art of storage. Whatever you need to store, we can help. And you don’t have to lug your items miles away to a storage facility. We’ll bring the containers to you.

In December 2016 one of the newest art galleries fashioned from storage containers was unveiled in Pinellas Park Florida, a city located near the Tampa St. Petersburg area. The gallery, made out of 40ft containers, not unlike the ones rented by A.B. Richards, was meant to serve as a gateway to the city’s art district, according to the Tampa Bay Times.

“It gives us an opportunity to show that we can think outside the box,” Pinellas Park Mayor Sandra Bradbury said after the project’s 2015 groundbreaking ceremony. The project only cost $250,000 and a local artist was invited to live in the new facility. The bottom floor was made up of three containers which were converted into a bright gallery space while the top floor, also made of three shipping containers was converted into an apartment.

Not all shipping container galleries are meant for the public. According to Washingtonian, a private collector built one in his backyard. Aaron Pomerantz had been collecting art for 20 years when he realized it was piling up. His solution was to take a white shipping container and put glass panels on it while connecting it to his house. The result was a gallery he uses to display his collection and the work of some of his artist friends.

Using shipping containers as a venue for an art gallery is not just an American phenomenon. You can find them across the pond in London too. The SE9 Container Gallery is the first of its kind in the British capital. The gallery opened in 2014 and is made from converted shipping containers. The gallery was built on the grounds of a local school. It aims “to be a platform to connect the local community with contemporary art,” that also displays the work of the school’s students, according to its website. They also have an artist in residence.

Artists are known for their unique look at the world and converting portable storage containers into art galleries certainly makes for an unusual venue. A.B. Richards would like to bring our containers to your storage venue. Whether you need extra storage space at home, at your office, or on your construction site. We’ll bring the containers to you and we’ll also pick them up without charging you extra. Contact A.B. Richards today!