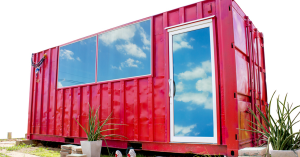 At A.B. Richards, we know that portable storage containers can be used to store almost everything. But lately, we’ve been noticing that storage units can also be converted into nearly everything. More and more, we’re seeing creative alternative uses for containers. One popular trend has been to convert portable storage units into office space. While we won’t let you do that at A.B. Richards, because we’re a rental company, we do think this is a fascinating trend so we want to tell you a bit about storage container offices.

A company in Miami called Little River Box Co. is specializing in converting shipping containers to businesses, according to the South Florida Sun Sentinel. One of their projects involves using 10 portable storage units to build a business development in Fort Lauderdale that will consist of restaurants on the ground floor and offices on the top floor.

“Between the modularity and the shippability [of the containers], the sky is the limit,” said company co-founder Gayle Zalduondo.

Using shipping containers, similar to what we have at AB Richards, for office design is still a hot trend, even though the idea took shape in the United States out of the 2010 recession, according to NPR.  What might have been the first multistory office building made out of shipping containers was built around that time in Providence, Rhode Island.

The three-story complex was divided into two sets of offices with a canopy made from the sides of the containers covering the central hallway. The building cost $1.8 million, but that’s half the cost of original plans for a conventional building that were scrapped because of a recession.

Chris Murray, a web consultant was the first tenant of the new building. “We decided to come here because it is a really unique and neat place,” he said.

An even more spectacular office complex is London’s Container City. It’s also a three-story structure that’s made up of 12 workplaces, according to Popular Mechanics. Environmental concerns were strong for the builders and the complex was made up of 80 percent recycled materials.  Container City was such a success that it gave rise to Container City II which reached five stories. There are 22 units in Container City II as well as an elevator and access for people with disabilities.

Las Vegas has a container office park with an artistic sensibility. The multi-story facility was the brainchild of zappos.com CEO Tony Hseih and it was designed to appeal to a younger workforce. Among the attractions at the office park are art galleries, bars, and restaurants.  There’s even a treehouse play area for lunchtime and after work hours that’s guarded by a giant praying mantis which is made out of recyclable material.

A.B. Richards Storage Containers Have a Lot of Uses