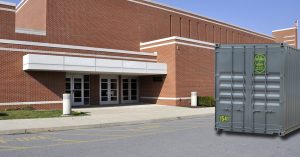 A.B. Richards can’t allow you to turn one of our units into a learning institution because we’re a storage container rental company and we can’t let you change the structure of one of our containers, but we have watched this phenomenon with fascination.

Helping Students at Home and Abroad

In April 2017, students, teachers, and officials held a ribbon cutting for a unique charter school. Vaughn Next Century Learning Center in Pacoima, California is undergoing construction of a school that will be made out of 75 storage containers, according to the Los Angeles Daily News. They will be converted into 28 classrooms.

The school currently has portable classrooms, but the new ones are going to be bigger at 1,600 square feet as opposed to the current 960 feet.  While traditional construction projects like this take 3 to 5 years, this project is expected to be completed in July. District officials say that projects like this allow school districts to be nimble in the face of sudden growth.

Portable storage containers are also helping poor children to get an education outside of the United States. Officials in Thane, a city in western India have been wrestling with the problem of getting street children to attend school. Students weren’t showing up at state schools, so government officials began building smaller schools closer to where the kids lived, according to the Straits Times. Called “signal schools,” because they’re often built near traffic signals, the Thane school is a 9 by 3-meter storage container. It operates after morning rush hour and before afternoon rush so the children can help their parents sell trinkets and flowers.

Using storage containers for classrooms may not be as restrictive as you think. Classrooms that were built at Oak Park High School in Ventura County, California include finished walls and floor-to-ceiling windows, according to the Ventura County Star. The classrooms are designed to last 50 years and withstand 200 tons of weight. Oak Park Superintendent Tony Knight told the website the $2 million project cost about a third of what a conventional construction project would cost.

Building storage containers for schools can help communities that are underserved. They can solve the problem of sudden growth in a school district and they can bring down costs. A.B. Richards can help bring down your storage costs too. We’ll deliver your portable storage container right to where you need it and pick it up for no extra charge. To learn more, contact A.B. Richards today.