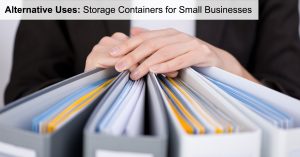 At A.B. Richards, we’re always happy when our customers use our portable storage containers to solve problems. For those who rent our storage units, that usually means solving issues related to logistics, lack of storage or organization. But we also know that there are people using storage containers for all sorts of unusual reasons.

One popular trend is to repurpose units to build small businesses. So while A.B. Richards is a rental company and we can’t let you turn our portable storage container into a frozen yogurt business, we can help you deal with your storage problems. And we do want to tell you about the trend towards creating small businesses from shipping containers.

How A Portable Storage Container Helped Fulfill the American Dream

In some cases, creating shipping container businesses helps fulfill the American dream. That was the case in New York City when Carlos-Ameen Jureidini-Cully tried to build his business selling refurbished sunglasses, according to Entrepreneur Magazine. He started out in 2008 selling at festivals and street fairs and while he wanted to expand, he couldn’t afford most rents.

Jureidini-Cully was able to set up shop in a repurposed storage container that occupies a 160-square foot space in Brooklyn’s Dekalb Market. He paid only $14,000 a month in rent plus utilities and he was able to improve his bottom line.

“In the street people are only willing to spend so much,” he says. “Being in a retail space allows me to control how my product is presented. It enables me to charge a premium.”

Repurposing portable storage containers into small businesses also help solve the issue of real estate costs. Kirk Lance told the Wall Street Journal that he lost tens of thousands of dollars when two Mexican restaurants he owned in Casper, Wyoming closed up shop. He had sunk the money into outfitting the restaurants to get them up to code, but the benefits of his upgrades reverted back to his landlord when he vacated the building.

Lance vowed that he would rather own his space outright rather than rent if he ever opened another restaurant. He was able to keep that promise to himself when he turned a storage unit into a Mexican eatery called Aprisa in Portland, Oregon. The move was successful and with the money, he saved he was able to run a more efficient business.

“We are able to operate much more efficiently than traditional restaurants because we require much less energy to heat and cool our small buildings,” Lance said.

Using storage containers to house small businesses isn’t something you only see in the U.S. Alessio De Laureto, set up his Italian takeout shop in London in a development called Boxpark, which is made up of 50 storage containers.

“I’m very happy indeed to be here,” De Laureto told BBC. “Myself and my business partner Maria are only starting out, so we couldn’t have afforded the rent of a proper [bricks and mortar] shop, and this is much better than having a pop-up or market stall exposed to the rain.”

As you can see, there are many useful reasons why people need storage containers, while we won’t let you start a business, we will deliver our rental containers to wherever you need them and we’ll also pick it up at no extra charge. A.B. Richards is convenient and we can help solve your storage problems. Contact us today.