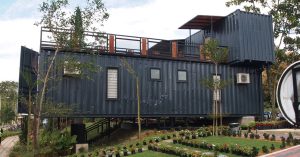 A.B. Richards knows that there’s no limit to how you can use a portable storage container. They can allow you to get your home organized, they can be helpful as commercial storage or give you to the ability to keep your equipment available at a construction site. People also come up with creative uses for their storage units. One of the most interesting uses for a portable storage container is to repurpose them into homes. While A.B. Richards won’t let you do that because we’re a rental company and we will need our containers back, we’re fascinated by the creativity and the usefulness we’ve seen from people, companies, and institutions who’ve converted containers into living space. We want to show you how those who’ve done it have changed landscapes, neighborhoods and created affordable housing.

There are many different ways that builders have refashioned portable storage containers into homes, and not all of these homes have boring, rectangular designs. An article in Popular Mechanics features an impressive, multi-story home in Redondo Beach, California that was constructed out of eight modified shipping containers. The elegant home was mostly built in a shop, which saved time and construction costs.

A more basic, inexpensive design is the Qwik House, designed by Adam Kalkin, a New Jersey-based architect. These pre-fabricated homes offer 2,000 square feet of space, three bedrooms, and two and a half baths. The homes are made of 75 percent recyclable material and the shell of the home can be assembled in a day, with the interior usually finished in about three months.

The speed and efficiency of shipping container homes have made them an ideal design for affordable housing. One city that has benefitted from the idea is Detroit.  In 2015, the city unveiled a three-story, 2,800 square foot apartment building in the city’s North Corktown neighborhood. The building contains two homes. One is a 1,800-square-foot apartment that has two bedrooms and two-and-a-half baths as well as a full kitchen and a balcony. The other apartment, which is located on the top floor is a one-bedroom, one bathroom 1,000 square foot apartment that also has a balcony.

California officials have used storage units to combat a social problem: finding housing for homeless veterans. According to TV station KQED, Orange County builders are in the process of creating a 16-unit apartment complex out of 54 recycled shipping containers with a kitchen, bathroom, living area, balcony, stairs and a courtyard.  The apartments will be called Potter’s Lane.

“We got the design ready, we hired our architect, and as we went through the process found out that this was going to be the first multifamily project in the nation that was going to be built with recycled shipping containers for homeless,” said Donna Gallup, the president of American Family Housing, which is overseeing the project. The plan received funding from California state agencies and is expected to take about a year to complete.

A.B. Richards Can Rent Storage Containers Near You

The number of ways using storage units can benefit society has increased by leaps and bounds in recent years and while A.B. Richards won’t allow you repurpose one of our rental containers, we appreciate the creativity. We know that our customers find creative ways to use portable storage units to handle their organization and storage needs. We have containers available throughout the northeast with locations in New York, New Jersey, Connecticut, and Pennsylvania, as well as parts of Massachusetts, Delaware and Rhode Island. To get started, contact A.B. Richards today.

We use cookies to ensure that we give you the best experience on our website. If you continue to use this site we will assume that you are happy with it.Ok