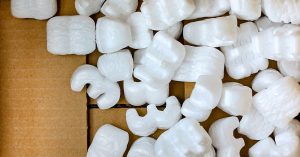 Consider the peanut. From George Washington Carver to Jimmy Carter they’ve been an integral part of American history. But there’s one type of “peanut” that’s made a major impact on America and around the world and it isn’t a legume.

It’s an invention that’s near and dear to our hearts at A.B. Richards. It’s something we see packed in our storage units every day as extra protection against damaging the goods inside. We’re referring of course to the packing peanut.

The Styrofoam peanuts that you find packed in boxes and other containers designed to serve as a cushion for fragile items.

At A.B. Richards, we’re committed to keeping your stored items safe and secure.  All of our portable storage containers are made of 14-gauge steel and are sturdy and dependable. We know that packing peanuts also contribute to the security of your items, so we thought it would be fun to take a look at the history of these tiny peanuts that spill all over the place when you open boxes.

Before the packing peanut, people would simply ball up old newspapers and stuff them into boxes or wrap it around particularly fragile items. But this wasn’t a particularly efficient way to insure items wouldn’t break. So companies started experimenting with other materials, including actual peanuts, according to the Pittsburgh Post Gazette.

In the early 1960s, Dow Chemical began to experiment with polystyrene products such as Styrofoam. In 1961 the company presented polystyrene fill at a plastics exposition at the New York Coliseum, according to the New York Times. The material was not yet shaped like peanuts. They were five-inch tubes that were difficult to produce because they got caught in factory hoppers.

So they cut the shapes down to smaller sizes. Some of the packing material began to resemble the letters “C” or “E” with grooves carved into the sides which makes the peanuts springier. Eventually, they began to look like a fattened letter “S” or figure eights which resemble peanuts. Thus the name “packing peanut” was born.

Did the Packing Peanut Have an Inventor?

There’s a bit of a controversy about the contributions of the person credited with inventing the packing peanut. According to the website Vision Launch, Robert E. Holden filed for a patent on the packing peanut in 1962 and a patent was granted in 1965. He was a prolific inventor but not a lot is known about the extent of his role in the development of the product. Holden sold the patent to Dow Chemical at some point and he died in Beaverton, Oregon in 2011.

Packing peanuts are a popular product that made storing items a lot more convenient for millions of people. And A.B. Richards can be convenient for you. We’ll bring your portable storage unit to your home, business or work site. Wherever you need it and we’ll pick it up when you’re done. Contact us today.