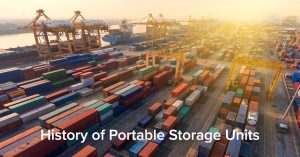 A.B. Richards Is the Best Solution to Your Storage Needs

You may not have thought much about the history behind our portable storage units, but we want you to know a little about the history of our rentals so you’ll have a better understanding of why A.B. Richards is the best solution for your storage needs. We’ll also get your portable storage containers to you a lot faster than an ocean vessel would, but that’s where our history starts.

From Shipping to Standardization

Portable storage containers evolved from shipping containers. Since the beginning of time, before the invention of trains and trucks, sea voyages were the most practical way to ship goods from one place to another. But before they could be shipped anywhere, they needed to be stored.

According to the website Container Home Plans, goods were stored on the side of the warehouse until a ship became available. The problem was loading them. All sorts of methods were used including sacks, barrels, and crates.  Loading these containers was a slow and cumbersome process. Transferring goods to and from other means of transport such as trains and trucks was also difficult. While some methods of making loading and unloading more efficient were developed, it wasn’t until the middle of the 20th century that a better system was designed by an American trucker and inventor named Malcom McLean.

McLean owned the largest trucking fleet in the south according to the Intermodal Steel Building Units Association. He saw how inefficient loading and unloading was and decided to try to come up with a better way. McLean came up with the concept of using standard sized containers to pack goods aboard ships.

McClean sold his trucking company and took out a $42 million bank loan and bought a shipping company, Pan-Atlantic Steamship Company which had docking rights in many eastern ports. After several tests, he settled on a design that’s the forerunner of today’s shipping container. He then modified an oil tanker to allow it to hold 58 of his containers holding 15,000 tons of fuel.

A.B. Richards Has Been an Industry Leader for More Than 30 Years

Other companies followed McLean’s lead and containers were standardized for ships, trains, trucks and cranes, according to the World Shipping Council. The industry became international in the 1960s and the 1970s. Containers evolved towards other uses and by the 1980s, the storage container industry evolved. In later decades, storage units have been used to construct homes, businesses and schools.

A.B. Richards has been a leader in portable storage unit rentals since 1982. We deliver storage containers throughout New York, New Jersey, Connecticut and other northeastern states. Whether you need it for residential or commercial use, A.B. Richards is right for you. To get started, contact us today.