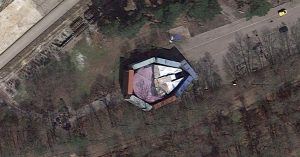 At A.B. Richards, we tell you all the time about the many uses for portable steel storage containers, but until recently we never thought that they might help hide the fastest ship in the galaxy from imperial storm troopers. OK. We’re not positive that’s the reason why the Millennium Falcon, the ship made famous by Han Solo in the original Star Wars trilogy, was recently spotted being camouflaged by storage units. But there’s something about Star Wars that excites the imagination.

A.B. Richards Can Solve Your Storage and Organization Problems

We believe that our storage containers can also excite the imagination. We’re constantly amazed at the creative ways our customers use A.B. Richards portable storage containers to solve storage and organization problems. So we weren’t surprised when we saw a story on the Mashable website that Disney, the studio that produces the Star Wars movies, was using storage containers to keep their Millennium Falcon set under wraps.

How The Millennium Falcon Was Spotted

According to Mashable, the fun started when someone, presumably one of the many Star Wars superfans discovered an anomaly in the universe on Google Maps. Specifically, the part of the universe where they make the Star Wars movies, Longcross Studios just outside London. From ground level, across the highway from the studios, all you would see is a bunch of shipping containers. But Google Maps uses satellite technology to film just about everything on our home planet (That would be Earth, not Tatooine.) so you can see what was hidden behind the containers.

It was the Millennium Falcon. There area lot Star Wars fans can tell you about the Falcon. Even if you’re not a fan, you can go on Wookiepedia and learn all about the spaceship that made Harrison Ford a movie star. Its most famous pilots are Solo, who was portrayed by Ford and his large hairy co-pilot Chewbacca. Hardcore fans might know that the Falcon was previously owned by Lando Calrissian, the character played by Billy Dee Williams.

The Wall Street Journal says the discovery was first made public after the Star Wars fan site Jedi News received a mysterious email which detailed precise instructions on where to find the Falcon. “We were flabbergasted,” said James Burns of Jedi News. “It was hiding in plain sight.”  A spokeswoman for LucasFilm which produces the movie, said that the spaceship was being stored and it wasn’t placed on the grounds as a ploy to get fans to search for it.

What isn’t known is what the future of the Falcon is. Will the location be used in an upcoming film about Han Solo?  Who knows? What we do know is that storage containers keep showing up in so many places for so many reasons even guarding an iconic movie set.

If you need storage containers to organize your home, business or work site, A.B. Richards can help bring balance to the force. OK, we’ll say they can bring balance to your life. We also make it convenient for you. We’ll deliver your storage containers and we’ll pick them up. To get started, Contact A.B. Richards today! And may the Force be with you.