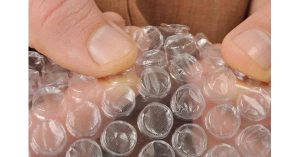 It may be the most addictive substance on earth but it’s all perfectly legal and extremely useful. We’re talking about bubble wrap, the sheets of plastic packaging which contain tiny air cushions that prevent your belongings from breaking while they’re in transit and in storage. It’s also an iconic product, known for the pleasure people take in popping it after they finish cushioning their belongings. We’re all about storage at A.B. Richards. We’re experts and we can rent you the portable storage units you need for just about any purpose. We’d like to share some of our knowledge about bubble wrap, because, let’s face it, you’ve probably always wondered how this unique product came into being. So we’re going to provide you with the history of bubble wrap as a public service to plastic poppers everywhere!

You might be surprised to learn that the inventors of bubble wrap weren’t looking to create a packing material. Believe it or not, they were actually trying to create a new wallpaper, according to Sealed Air Corporation, which manufactures the “POPular” product. The year was 1957 and Alfred W. Fielding and Marc Chavannes, the two engineers behind bubble wrap were trying to create something that might be attractive to the emerging beat generation, according to Forbes. At the time wall coverings of bamboo were popular.

The duo crafted the first bubble wrap in Hawthorne, NJ, by sealing two shower curtains together with a smattering of bubbles. They weren’t able to sell the product as wallpaper, so they tried to sell their invention as greenhouse insulation. That was unsuccessful as well.

How Bubble Wrap Found Its Groove

According to Mental Floss, the perfect use for bubble wrap was discovered in 1959 when IBM announced the release of their new 1401 variable word length computer. Frederick W. Bowers, a marketer at Sealed Air pitched the idea of using bubble wrap as packaging material to protect the computer as it was shipped. IBM liked the idea.

The rest, as they say, is history. Bubble wrap has propelled Sealed Air to become a  $7 billion industry in 2015, according to Fortune. It’s also become a beloved product for reasons that have nothing to do with its ability to secure items that are being packed or put into storage.

Why Bubble Wrap is Good For You

That’s because people love to pop bubble wrap. Yahoo News has said that it’s “universally acknowledged around the world,” that popping bubble wrap is “one of the most satisfying little things in life.”

It turns out that science backs up this idea. An American psychology professor studied the effects of bubble wrap and found that popping it caused people to become more relaxed.  Professor Kathleen M. Dillon gave bubble wrap to a sample audience and wrote, “Those who got to pop two sheets of Bubble Wrap felt at once calmer and more awake after they were done than before they’d started; they also reported higher levels of calmness and alertness than a group that was not granted popping privileges.”

Pop Into A.B. Richards to Store What You’ve Packed

So popping bubble wrap is good for you. And so is storing your belongings with a container from A.B. Richards. Whether you’re looking for a portable storage container for residential storage, or need them for commercial or industrial storage or want to keep a storage unit on a construction site, we can help. We’ll deliver your storage container and pick it up for no extra charge. Contact A.B. Richards today.

Previous Post: « Tips on Storing Important Documents
Next Post: Why Renting Our Storage Containers for Business Is Cost Efficient »